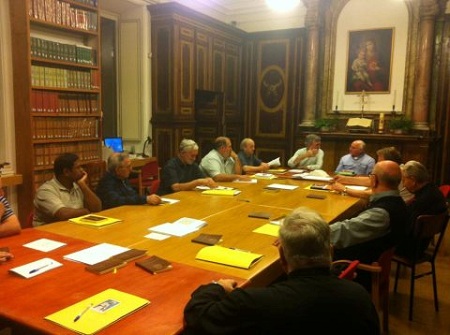 Rome. From the 8th to the 11th of October the Claretians from the Delegation of Italy met once again as part of the process of permanent formation at the 21st of their encounters called the “4 x 4”.

On this occasion the participants, coming from all the communities of the Delegation, reflected on the vocational theme: “In a Dialogue with Youth”.

For this they used two biblical “Lectios” which guided their reflection on the personal and community level. The first, directed by Fr. Maurizio Bevilacqua, was centered around the passage of the “rich young man” (Mt 19: 16-22); the second was directed by Mons. Zuppi, Auxiliary Bishop of Rome and was centered on the text of 1 Jn 1-7: “This which we have seen”.

Fr. José Félix Valderrábano, CMF, Secretary General of the Congregation was also invited, who discussed the process of congregational reorganization in Europe.

On his part, Fr. Josep Abella, Superior General, enlightened the group with various themes which he had presented to the entire Congregation in the recently published circular letter: “Missionaries”.

In summary, these days also helped in the sharing in and discernment of other important themes of the life and mission of the Delegation, as well as to how to be in tune with the Church during the celebrations of the 50th anniversary of the Second Vatican Council.